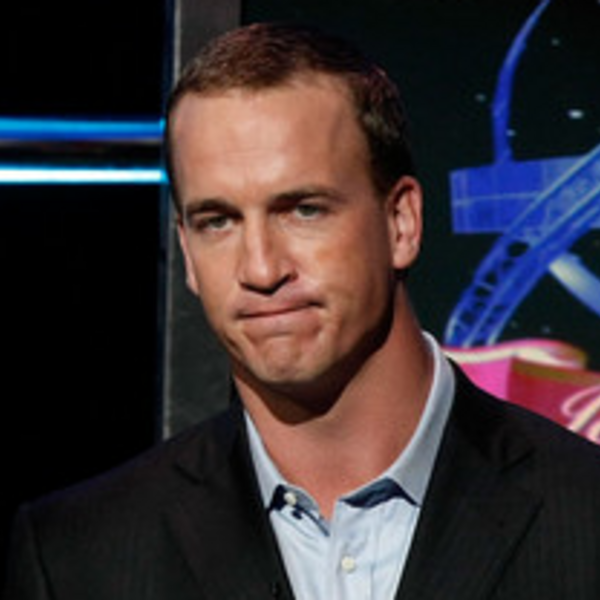 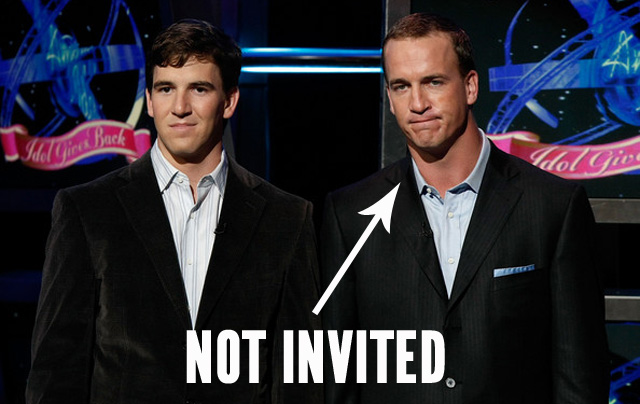 1. Guy who is way too excited for the halftime show.

Overheard: “I can’t wait for Madonna! Ten bucks says she opens with Holiday.” I hope there’s some sick surprise, like Bon Jovi playing a mashup with her. That would be tight!”

2. Guy who still thinks commercials are the best part and forces laughter at trite beer ads to prove his point.

3. Degenerate gambler glued to his phone/laptop, betting on every play and prop bet.

4. Guy who won’t shut up about his office pool and how he almost won it last year.

Overheard: “Dude, I was this fucking close! This dork from accounting beat me by one point, and he doesn’t know ANYTHING about football. I was so pissed, bro!”

5. Girl who hates football, but cheers for her dickhead boyfriend’s team because he’s a manipulative prick who makes her beg for validation.

6. Guy who coaches youth football and eagerly breaks down the game’s strategy for the rest of us mere pedestrians.

Overheard: “See, the Giants want to score before halftime, but they don’t want to leave TOO MUCH time on the clock and give the Patriots a chance to score, too. I did the same thing against Springfield in the playoffs. I wasn’t gonna let little Jimmy Burke burn me again!”

7. Guy who saw Drew Brees at the airport and thinks he’s overrated because “he’s not that big.”

Overheard: “I’m telling you, he’s MAAAYBE 6’1″ with shoes. He wasn’t even the biggest guy in the terminal. I saw him in line at Jamba Juice, and I totally could have tackled him from behind, but his kid was there and I didn’t want to embarrass him.”

8. Guy who spews esoteric football terms, but can’t explain what they actually mean when pressed.

Overheard: “They need to use zone blitzes to counter those delayed slip screens!”

9. Desperate girl with no self-esteem who pretends to love football and beer so guys will think she’s super cool and fall in love with her.

Overheard: “I’m TOTALLY addicted to football! Most girls spend weekends shopping and working out. Not me. I’d rather chill and watch sports. And I make the BEST game snacks!”

Extra point: She has no idea which teams are actually playing in the game, and the only football players she can name are the ones involved in tabloid gossip.

10. Fat ass who just came for the snacks.

Extra point: Will try to flirt with the no-self-esteem girl. Unfortunately, she’ll eventually realize how little he knows about football and that even she can do better.

11. Guy who already has the Patriots’ offense solved because he’s “crushed them on Madden a million times.”

Overheard: “Dude, all you need to do is collapse the pocket with the nose tackle, then switch to the blitzing linebacker and knock the shit out of Brady with the Hit Stick button.”

12. Socially awkward guy who tries too hard to fit in by overreacting to mundane things.

13. Guy who thinks his terrible team is one key draft pick away from winning next year’s Super Bowl.

Overheard: “I already booked my flight to New York for the draft! We were 4-12 last year, but we were SO CLOSE to being 12-4. Three of those losses were by less than four points, and the refs basically handed two more to the other team. If we snag that left tackle from USC, we’ll be unstoppable!”

14. Guy who high-five rapes everybody, even when celebration isn’t warranted.

15. Guy who tries to teach the token hot girl about football because he thinks she’s impressed by his condescending tutorials.

Overheard: “See that guy with the ball? He’s trying to throw it to one of those little fast guys before the other team tackles him. That’s called a sack. Don’t worry; I didn’t really understand football until I made captain in high school.”

16. Guy who thinks his (obviously premeditated) sexual puns are hilarious.

Overheard: “Time to penetrate the end zone! LOL! They should double-team the tight end! HAHA!”

17. Obese slob who thinks he could be an NFL lineman because he’s “heavier than those guys” and “used to wreck shop in JV.”

Overheard: “People always ask if I play football because I’m such a big guy. I wear 5XL T-shirts. Most of these guys are only 3XLs. I weighed 350 in high school. I would have gone pro if coach didn’t bench me because of my asthma.”

18. Guy who hangs on every word the broadcasters say, praying they’ll misspeak so he can ridicule them.

Overheard: “Did you hear that? He just said this is Eli Manning’s second Super Bowl in seven years. This is his eighth season. Fucking morons!”

19. Guy who is SO FUCKING INTENSE about football that you BETTER NOT FUCKING TALK to him when his team has the ball!

Overheard: “Shut the fuck up, everybody! I want to hear Brady’s audibles and all the offensive-line calls! This is the Super Bowl, not fucking happy hour!”

Overheard: “Yeah, Manning is pretty good, but his passer rating is only 78.2 when rolling to his left in domed stadiums.”

21. Guy who wears a zany wig, shoulder pads and face paint because he’d rather prove he’s a die-hard fan than comfortably enjoy the game.

Overheard: “What do you think of my outfit? I spent two weeks putting it together. I can’t wait to post these pictures on Facebook!”

Harmony (Lauren Lapkus of “Orange Is The New Black”) has some quick makeup tips for you! — Hey guys! This is a look I do almost everyday when I’m in a rush to school or to the store. Don’t judge. I tried! Thank you so much for watching! I appreciate all of the love and support you guys show me more than some of you guys will everrr everrrrrr know 🙂 xoxo ? — 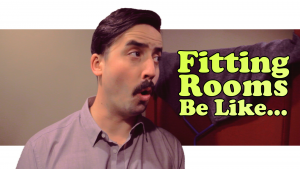 Stays in the fitting room 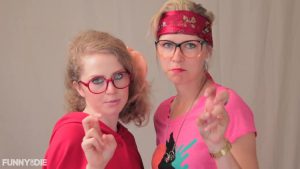 Everyday a hipster has to turn away when they hear the word ironic. Hipsters are people too. Please, don’t turn your back on this issue. Help others be less ignorant.