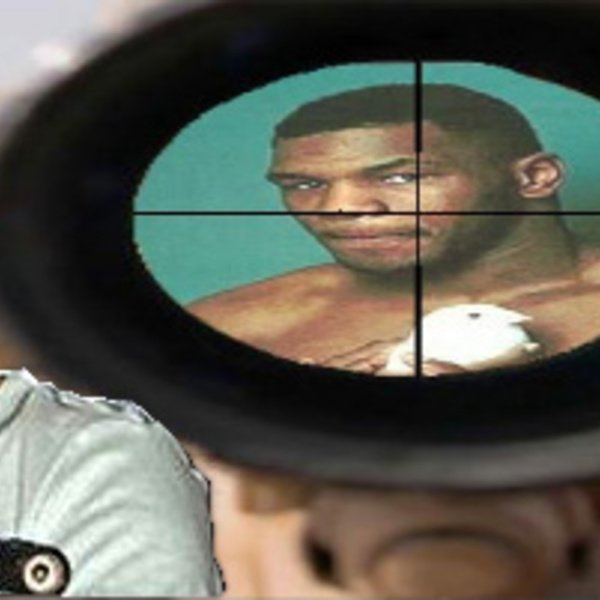 Let’s get ready to rumble!!!

Next weekend, Sarah Palin, the self-proclaimed “Mama Grizzly of Reality TV,” has her sights set on a heavyweight title fight with fellow reality star “Pigeon Mike” Tyson to decide who is the greatest pound-for-pound train wreck on cable TV.

Palin is apparently fuming over Tyson’s show’s instant popularity as well as some verbal jabs Tyson landed on the series premiere of his gripping pigeon racing drama titled Taking On Tyson.

The comments were made during a segment that included a cameo appearance by President Barack Obama.
Obama, referencing the bulletproof vest he's required to wear, joked “this may come in handy if Dick Cheney mistakes all these pigeons for wild game!” Tyson quickly shot back “or, if Sarah Palin recognizes we're Black.”

Palin immediately took to her twitter page (the real one not the fake one) and tweeted: 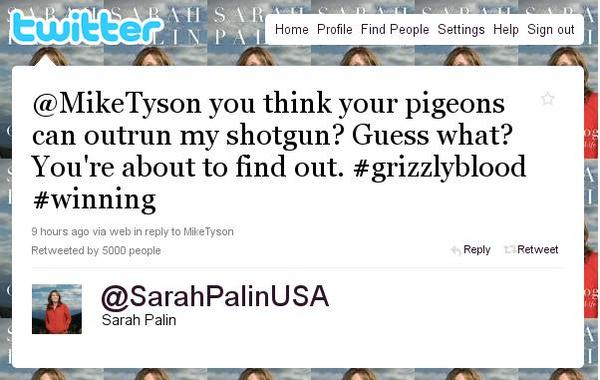 And it looks like Palin intends on following through on her threat.
A hunting fundraiser is in the works and tentatively schedule for next weekend in New York City. The fundraiser will be held on the rooftop of a sky skyscraper owned by fellow reality star/Republican presidential candidate Donald Trump. The skyscraper is adjacent to the set of Tyson’s show where much of the pigeon racing takes place.
The event, tribute to Republican’s devotion to God and guns, has already been promoted vigorously across the nation’s conservative talk radio stations, and has attracted a veritable “Who’s Who” of the GOP political elite.

Spokesmen for former Vice President Cheney and reality TV host/Republican presidential candidate Mike Huckabee have confirmed they will also be in attendance. 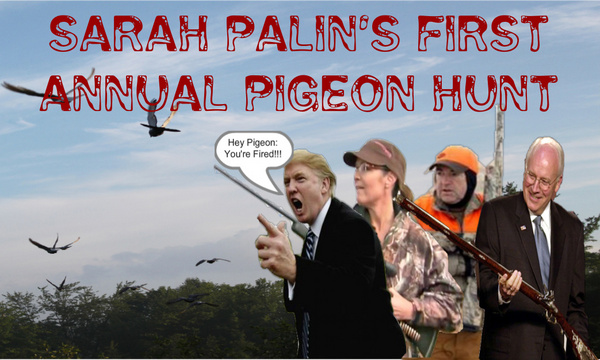 The $10,000 per-shot fundraiser will benefit several tea party groups throughout the state. At a press conference, Dick Nutter, a spokesmen from Buffalo's Tea Party Patriots, summed up the event's theme in the eyes of conservatives, proclaiming “Our founding fathers gave us the second amendment and our heavenly father gave us pigeons. I don't believe that was one of them coincidences.””
When asked for a response regarding the impending showdown Tyson ‘ stated “Sarah Palin, I'm coming for you. My style is impetuous. My defense is impregnable, and I'm just ferocious. I want your heart. I want to eat your children especially the slutty one Bristol. Praise be to Allah!” 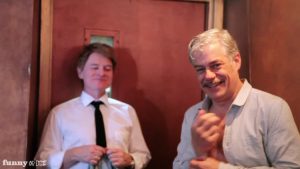 John Ennis stars in this sketch about an Italian family restaurant that caters to men with a secret. Watch the FULL EPISODE at http://www.youtube.com/watch?v=iyFXo0bHRGc

Door Drop is the ultimate convenience app for millennials, elevating the food-delivery experience to a whole new level. So sit back, relax, and download Door Drop today, it ‘s the home delivery mobile app you ‘ve been waiting for! 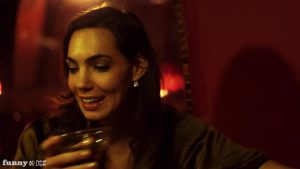 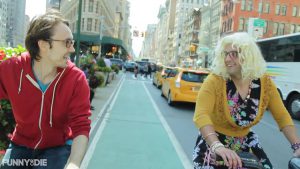 When Nick is kicked out of his apartment by his best friend Joel, he has to figure out a way to put his life back together. Luckily, a run in with a weird hippy named John Garcia gives him the idea that just might help him win it all back. 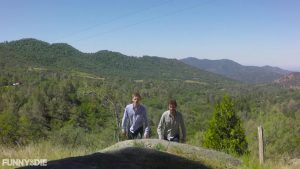 Hotel For Dads’ grandest adventure yet. 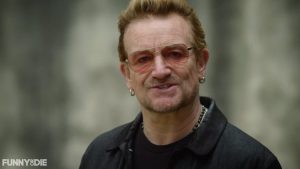 Bono gives you the chance to do something truly unique: join him for a bike ride through Central Park in NYC! Ride, laugh, and snap selfies. All to support (RED). Enter here: http://bit.ly/OmazeBonoBikeride Every entry of $10 or more supports (RED) ‘s fight for an AIDS FREE GENERATION.