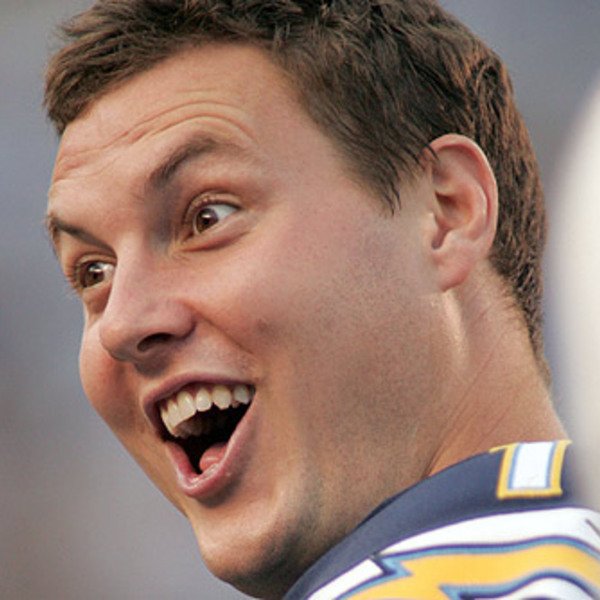 I know I know. I'm a little getting this up, as usual. You probably went to Funny or Die on Monday to be one of the eight people who read the NFL recaps and found it covered in Halloween content! What kind of NFL recap site is this??? Relax, people I made up. This site does more than NFL recaps. It also does other things, like full page spreads for soda companies and comedy skit videos.
But oh boy am I glad I waited til Tuesday to write this (I know I still could've written this on Monday, but c'mon I'm a busy guy who also had to go pick up a tuxedo rental because he's obviously very important though not so important that he owns his own tuxedo. The one I got fits a little funny, but I'll save that for the highly anticipated Tuxedo Recap). ‘
ANYWAY, my laziness worked out as I now get to talk about Monday night's game between the Chargers and Chiefs, clearly a product of Monday Night Football's programming director's predilection toward alliterations/mediocrity.
If you missed the game, and I assume you all did, it was actually great! And this GIF of Philip Rivers sums it perfectly. Oh, some background: Rivers threw for 300+ yards but managed to do all the little things to throw a game away. Yes, that could be said about any Rivers performance, but this one included a botched snap while setting up the game winning field goal. But I digress. Here's the GIF:

“This is the worst day ever.” Oh, Philip. It's not so bad. You don't have to be a sourpuss all the time. Just remember that you get paid millions of dollars to play games with your friends. 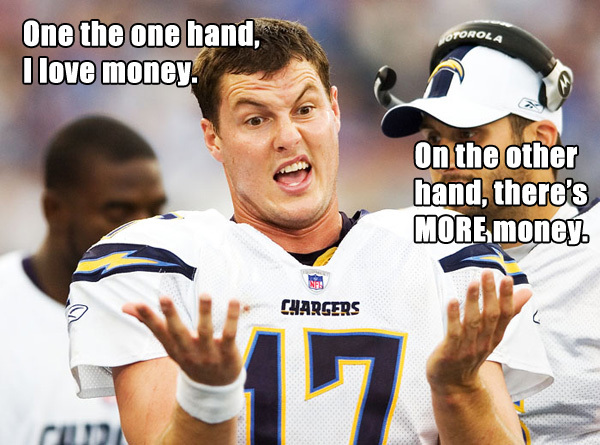 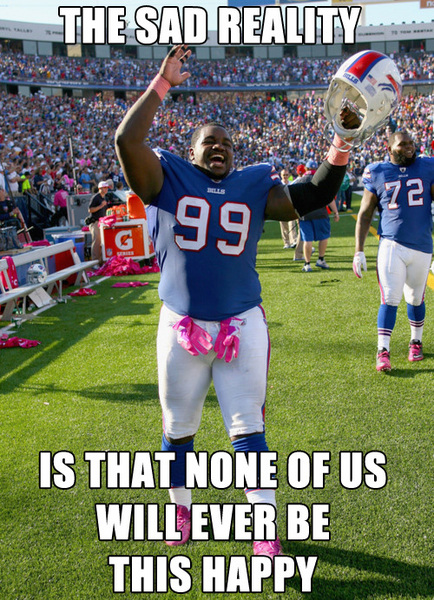 My life's mission is now to be Marcell Dareus. Though a lifetime of disappointment in the Bills would leave me with no clue what to do with the joy on display above.
So the Patriots' Julian Edelmen was arrested this week. If you play Fantasy Football, you know Edelman as your Wes Welker handcuff (TOTALLY NAILED THAT FANTASY FOOTBALL JOKE FOR YOU GUYS). He was arrested for “indecent assault.” 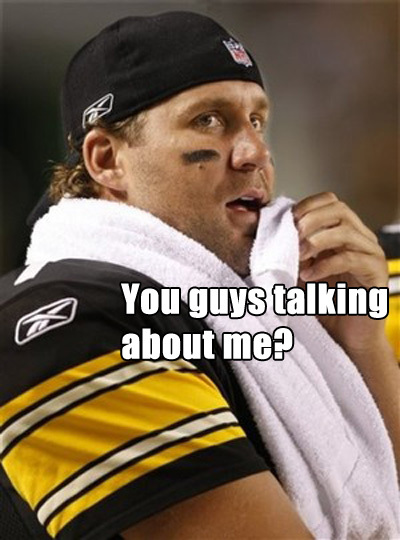 No, Ben. Not every assault charge is about you. Hell, according to the sign up in the Steelers locker room, it's been 407 days since the last Sexual Assault charge. That's something you, and the Steelers organization can be proud of. Anyway, back to the games. The Steelers butt-fucked Tom Brady against his will en route to a convincing win.
Tebow Time? Sure. After last week's dramatic comeback, football fans have been anxiously waiting for Tebow to turn in a complete performance. To play at a certain level for four quarters. That happened this weekend. Instead of playing like the worst quarterback in football for 55 minutes, he did it for 60. 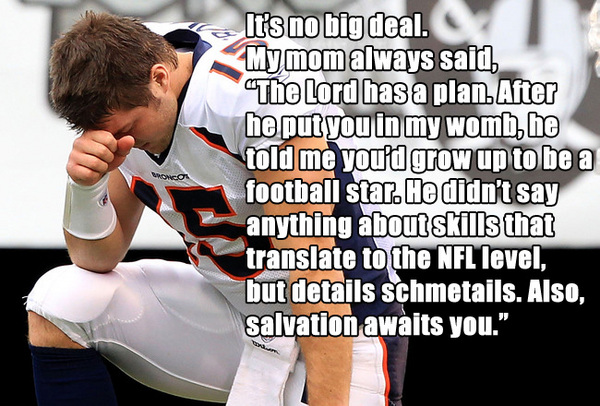 I need to address the “Tebowing” movement that

last week. Originally, I was planning on something like:
Dear Internet,
‘
Please stop.
Your Pal,
Dan
But something tells me two things will put a stop to planking's inbred cousin. One, Tebow's performance. Two, the taunting the Lions gave him after nailing him to the 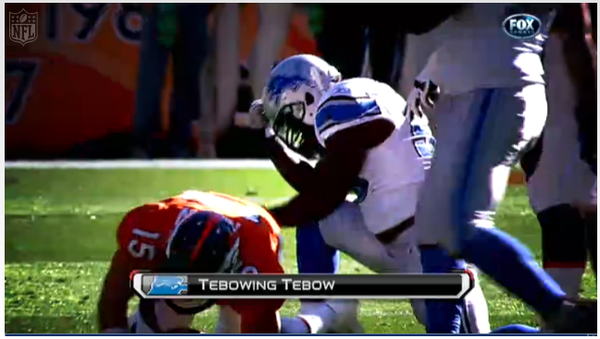 Well. Played. Shark. Jumped.
What else happened this week?
The Rams won! Good for the city of St. Louis. You guys needed something to cheer about. Wait, what's that? The Cardinals won one of the most exciting World Series ever played? Interesting. I, like most Americans, couldn't name four players on that team, yet could give you every single detail of Kim Kardashian's divorce. IT'S CALLED PRIORITIES.
The Eagles are back! The dream is alive and well in Philadelphia. It's a fairy tale story, really. Turn convict into hero, spend hundreds of millions of dollars on a supporting cast for said hero/convict, give Andy Reid his own personal buffet. It's what we all fantasized about as kids.
Eli Manning led the Giants to a dramatic comeback victory. If he wins MVP, I'd like to see this newspaper cover. 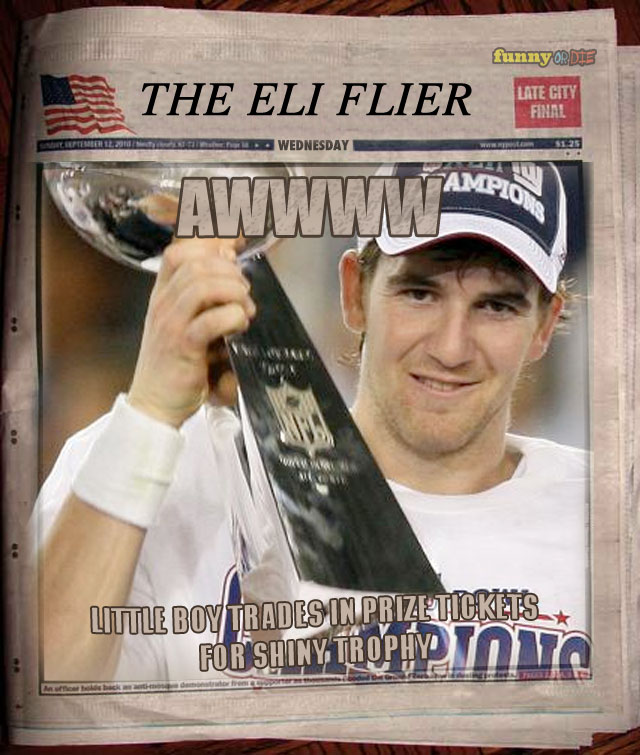 Sure, some other games happened, but whatever, it's Tuesday. Possibly even Wednesday by the time you're reading this and I need to go pick up my tux because I'm in a wedding this weekend and I need to look like someone who shops at Men's Wearhouse. See you next week for the Men's Wearhouse recap! 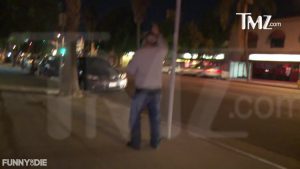 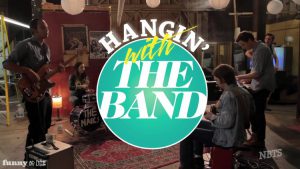 Nick Thune sees if he has what it takes to “hang” with NBTS house band, the Narcs. 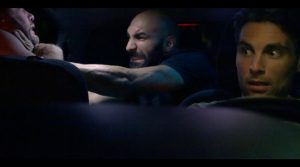 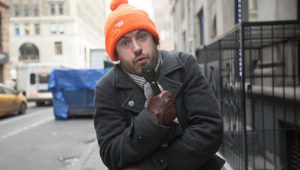 The Funny Or Die News team is in New York City bundled up to brave the bone-chilling Arctic temperatures and investigate how their fellow New Yorkers are coping with the bitterly cold temperatures blasting the region. 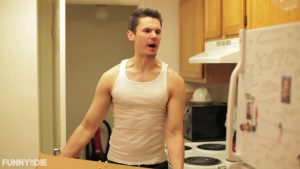