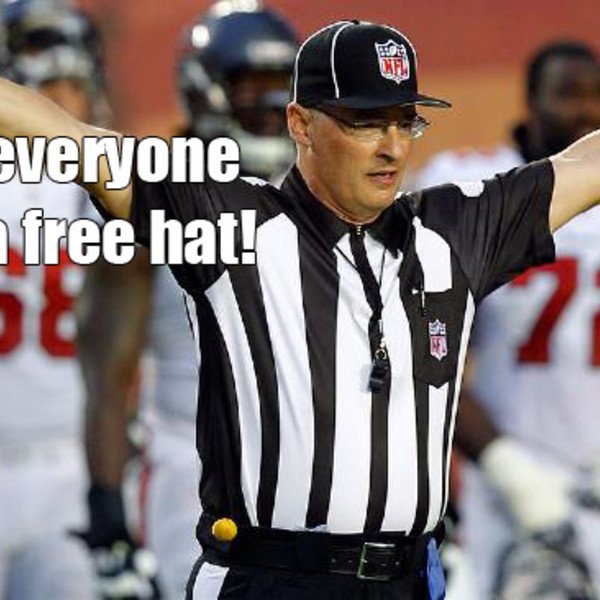 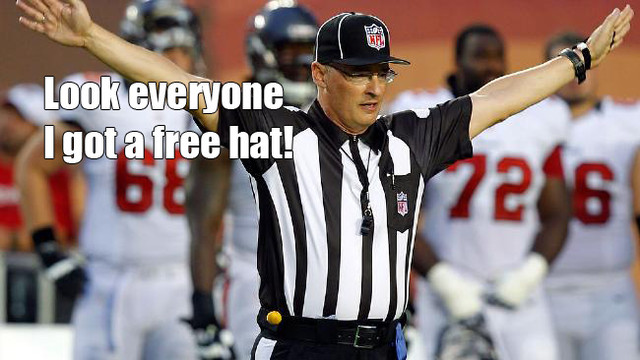 Listen, it's Rosh Hashanah and I don't have much time to focus on football. Lots of praying and looking forward to the new year need to be done. Just kidding, I fulfilled my duty of being a Jew this year by waking up with the crippling fear that today could be my last day on this earth. Every day is Rosh Hashanah in the Abramson household.
Moving along ‘to the NFL!
You know who had a bad Rosh Hashanah? The replacement refs. Unless you count being inept as a good thing. Then they had a wonderful day.
I actually don't mind the scabs filling in. It kind of feels like we're in a beer commercial where one lucky fan gets teleported from a tailgate to officiate a game. Which is kind of what happened: 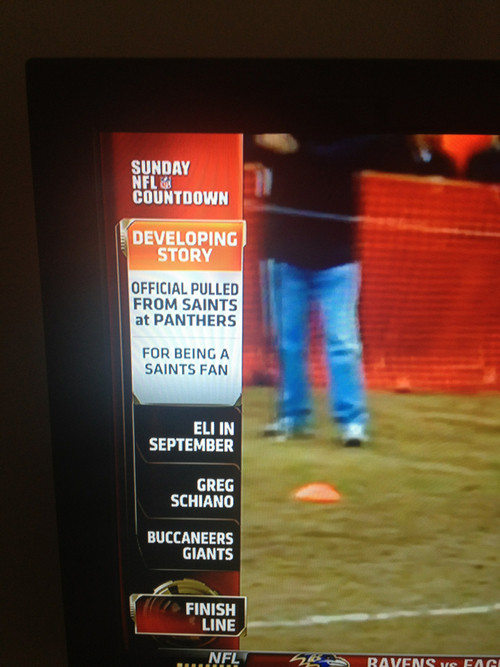 Oh! They also ruined a few games? Like the one between Redskins and Rams game when they failed to break up a fight before it escalated, resulting in a penalty against the Redskins, causing them to lose by a field goal. 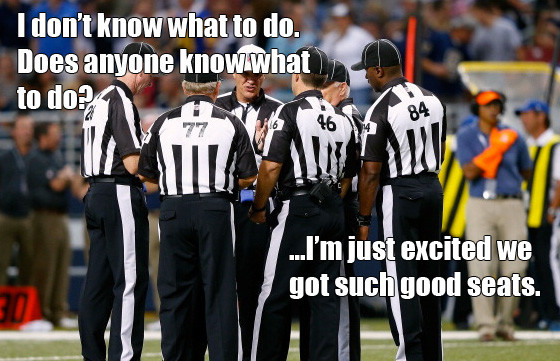 I don't know what's really going on between the NFL and the Refs. All I know is that the powerful men behind a billion dollar industry are fighting with the guys who work ONE DAY A WEEK. Let's figure this out, guys.
Oh, one more thing about the Rams/Redskins game: we finally got a look at Johnny Hekker, the infamous punter who's been ducking the spotlight for years. Reveal yourself, Hekker! 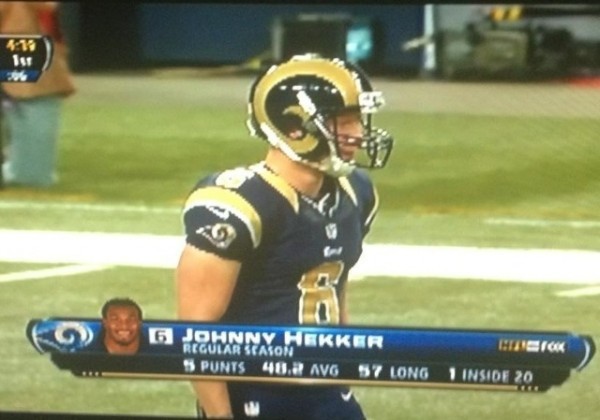 What else happened this week? The Giants beat the Bucs after Eli Manning shook off a few early “Uh Ohs” to throw for 510 yards and three scores. All in all it was a very gutsy and mature performance by Eli to hang in there after the rough start. Then again this exchange went down afterward: 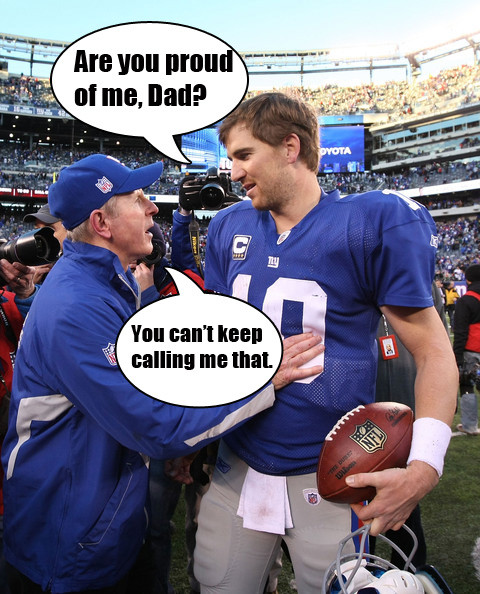 Oh hey, have you guys noticed that the San Francisco 49ers are good? HAVE YOU GUYS BEEN AWARE AND NOT INFORMING ME BECAUSE FUCK THE NFC WEST THEY ARE BORING AS SHIT?
Well they're very good. And they took down the Lions and looked dominant in doing so. I can't help but be impressed with this team. All-around solid football. And how about Vernon Davis? Remember that time a few years ago when then-coach Mike Singletary absolutely ripped him a new asshole and then shit in that asshole on live TV? It was like watching a domestic abuse in progress and then watching the abuser host a press conference to brag about it. I remember thinking “Why is Singletary wasting all his domestic abuse energy on Vernon Davis? That guy sucks.”
Well it turns out he was right about wanting to light a fire under Vernon Davis' ass, but the only problem is it didn't work until years later and it's paying dividends for another coach, Jim Harbaugh, who has moved in on a Vernon Davis who wants to take control of his life and be the woman he can be. What I'm saying is that Davis is good at football and is likely sleeping with Jim Harbaugh.
Speaking of abuse (and not in the awesome metaphor like the one I made above), we haven't talked about Ben Roethlisberger and his wandering eye/hands/penis in a while. Not that we should ease up on sex offenders (that's just what they want), but there's no need to beat a dead horse, especially one that the Steelers brass have bravely stood behind and supported because he makes them money.
That said, sometimes it's a special time when sex offenders get a little bit of the ol' what's good for the goose is good for the gander. 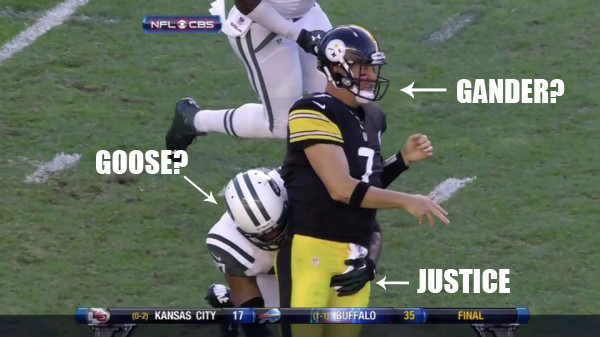 I'm not going to talk about the Bills win over the Chiefs after dedicating so much time to them last week. This is a democracy and oh fuck it I love you CJ Spiller. I love your 10 yards a carry. I love your touchdowns. I love the way you make me forget about Fred Jackson who I feel very conflicted about because I obviously still have some residual feelings for him. 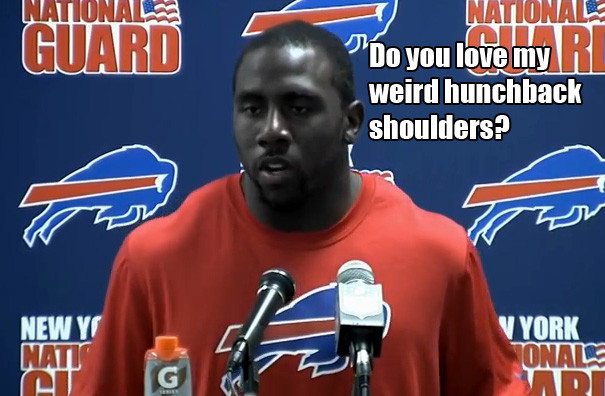 Yes! It's like you're permanently wearing shoulder pads! That's what makes you so strong!
Hey! Good news! The Patriots lost! Obviously this only good news for those who enjoy justice, but still. And it was done at the hands of the Cardinals? The NFC West again? What is going on? Larry Fitzgerald probably went off on them, right? Exploited that secondary? 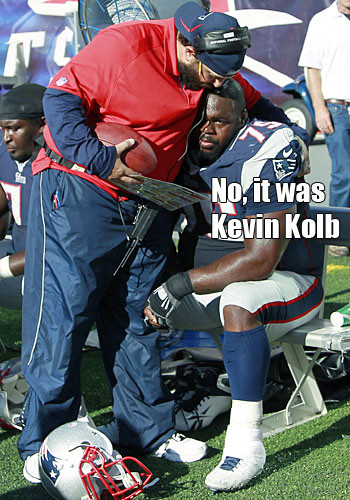 Kevin Kolb!!!!!! What-is-going-on-this-world-is-going-insane. SRSLY. Also, what is happening in New England? Why has Wes Welker been demoted in favor of his son, Julian Edelman? I WANT ANSWERS.
At least things are back to normal with the Jets. Mark Sanchez has a very Mark Sanchez day, which is to say he Mark Sanchez'd it up like the Mark Sanchez we've come to know and Sanchez. Needless to say, fans are beginning to call for savior/backup QB, Tim Tebow. How'd he fare? Well, he absolutely dominated the Steelers en route to 22 yards. That's almost Chris Johnson-esque.
The Bengals took down the Browns in a game that feature a battle of two quarterbacks who look like they used to bully me in middle school.
Lots of other things happened this week, but you know what, you're likely reading this Tuesday and we've all moved on. It's 5773, guys. 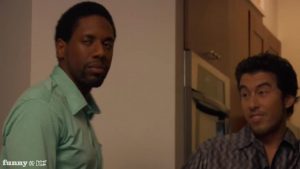 Newly dating Angelica, Drake wrestles with the decision to tell her about his, you know, vampire thing. Featured on Channel101:NY http://ny.channel101.com/ 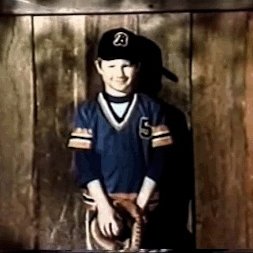 These GIFs are like open books that don’t really say anything or have any words in them. 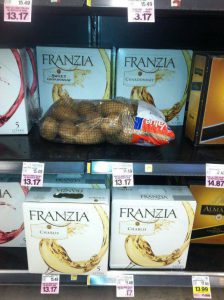 Sometimes in life/at the grocery store, you have to make sacrifices. 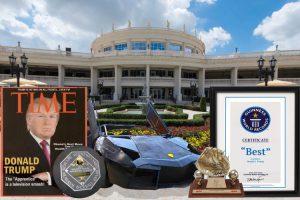 A fake TIME magazine cover is not the only fake that The Donald had created to stroke his ego. 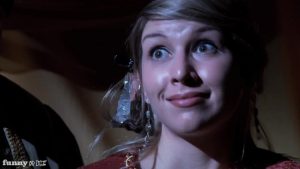 Need a refresher on season 1 of “Game of Thrones?” Let the Barber of Westeros fill you in on all the dish of the Seven Kingdoms in 6 minutes. Sizzle! 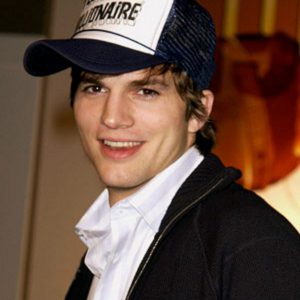