President Obama released a video Thursday, shot while flying on Air Force One and released on Facebook (Let ‘s see Reagan try to do that!), that proposed a plan to make the first two years of community college free to students “willing to work for it.”

First of all, that is not what I pictured Air Force One looking like on the inside. I think the big desk threw me off – how do they get one of those in a plane? Anyway, that ‘s beside the point. Free community college would be an amazing feat for a president to pull off and it is being compared to when America made high school available to everyone.

But of course there are doubters and criticisms of the proposal. The first and most logical is: How does the president plan on paying for this? Fair enough.

Apparently, federal funding will account for 75% of the cost and participating states will be expected to pick up the rest. Which of course begs the question: where will all that money come from to pay for that 75%? Easy. Trimming the national budget to make room for new initiatives is something I think about all the time. Here are a bunch of ideas I came up with for where to cut funding without having to do any research at all:

The FDA: None of the things I eat are FDA approved and I ‘m doing just fine.

Health and Human Services: A simple law requiring everyone to exercise would cut spending here in half. Maybe we could all line up in rows in front of the White House and do jumping jacks together every morning as a loudspeaker counts them off “1 ‘2 ‘3 ‘4 ‘Keep jumping for your country!”

The Department of Defense: Defense spending accounts for a huge amount of the federal budget. Let ‘s just take one year off of having a military. Lay low for a little bit and see what happens. It will save hundreds of billions of dollars and I bet a lot of countries won ‘t even notice.

NASA: Exploring space and learning more about the universe around us is very important. I ‘m mainly concerned with all the money spent to make memory foam mattresses. Just sleep on regular old springs, America, don ‘t be a wuss.

The White House 4th of July Picnic: Every year the White House staffers dip into the budget to buy meat for grilling, chips for dipping, and potato sacks for racing, all for what? Raising moral? Please. 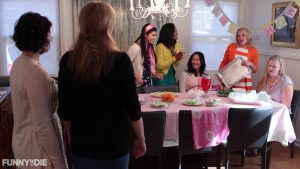 Any woman who’s been to a baby shower can relate! (A JumpCut Collective Production)

A look back on five classic videos on the day that Gangam Style broke YouTube.

The new face on late night TV goes after the candidate of the most established political family. 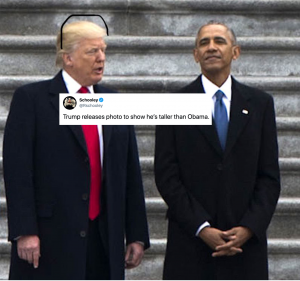 God what an absolute nightmare