The State of the Union was last night and President Obama definitely talked about a lot of issues that are important to the state of America and the world. He expounded on strategies he has for how to make this country a better place and he explained in some broad detail how he plans on carrying out those strategies. But also some other things happened that we can make fun of, so we ‘re gonna focus on those in this post.

The internet was buzzing with jokes and GIFs and vines last night (as it does every night), but from 9 p.m. to about 10:30 p.m., all of it had a central theme: #SOTU. If you missed the speech, don ‘t worry, we did too. And also, stuff on the internet never goes away, so here ‘s some of the best the net had to offer last night:

We ‘ll start more general and get into some specific incidents that deserve their own section.

“14 of the 15 hottest years on record were the result of looking at this photo of me.” #SOTU pic.twitter.com/FLy6k7L9ri

One year doesn't make a trend, but this does : *does shmoney dance* #SOTU

So we’re just ignoring that POTUS didn’t even *mention* what he’s doing to prevent the human/animal hybrids that Bush warned us about. #SOTU

And this isn ‘t funny, it ‘s just plain interesting:

These words were used for the first time in a #SOTU address, says @jaketapper http://t.co/xuFLr21LhE #CNNSotu pic.twitter.com/B51SASRhC5

In case this is the first thing you read this morning, Obama got in a pretty sweet burn on some Republicans that clapped after he said he doesn ‘t have any more elections to win.

That #SOTU burn, if you want to see it again https://t.co/IfCQws3Wou #SOTU

that ‘campaign ‘ joke was solid, but kind of a letdown when you read the original line #SOTU pic.twitter.com/nOdQWKA2oG

Okay, this version of the Obama burn gif from #SOTU is officially the winner. pic.twitter.com/7AKEFHO7ks

The internet also had a lot to say about Joni Ernst, the Republican ‘s choice for making the GOP response to Obama ‘s speech. She talked quite a bit about bread bags.

Sen. Joni Ernst only had one good pair of shoes growing up, she says in GOP #SOTU2015 Response @ABC: https://t.co/gIgumMTJEq

And had a bit of a robotic, dry delivery (but not as dry as Marco Rubio, right Marco?)

Haha, my man Marco Rubio, such a good sense of humor.

Congrats to Sen. Joni Ernst for rising up from her humble beginnings as an animatronic doll in the Small World ride at Disneyland. #SOTU

Joni Ernst's response following Obama's speech is like having a Trader Joe's clerk do a set after Louis C.K. #SOTU

“May the odds be ever in your favor!” – @joniernst #SOTU

Another big moment in the night was when the camera cut away to Energy Secretary Dr. Ernest Moniz, who did the internet a favor by having some luscious long gray hair and by making a funny face when the camera was on him.

Will never tire of this Ernest Moniz #SOTU GIF pic.twitter.com/AI7VPeKnoa

And, of course, John Boehner had an orange face.

RT @jamrockstar: Here are the @pantone colors for Speaker Boehner's face. #sotu pic.twitter.com/Ygcr8S1hxS /Why the internet is scary/precious

Also in attendance was astronaut Scott Kelly who is preparing to be shot up into space to live there for a full year. Obama talked a bit about the importance of NASA and then wished Kelly luck and asked him to ‘make sure to instagram it.” I ‘m pretty sure both Obama and Kelly think Instagram is just young person slang for ‘take pictures.” But Scott got a long applause break that he didn ‘t seem to know what to do with.

Did Scott Kelly JUST find out he's about to spend a year in space? 'Cuz he doesn't look happy about it. #SOTU

And we get a year without Scott Kelly! Just kiddin, buddy, we love ya. #SOTU

Finally, at the end of the State of the Union, I guess it ‘s customary to have the president sign a bunch of autographs. So he did some of that.

He even signed a young intern ‘s tie (This was definitely this kid ‘s only tie. He ‘s gonna wear it to work today and act like he planned it all along). 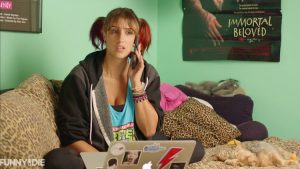 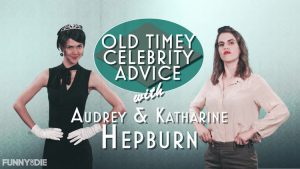 Audrey Hepburn and Katharine Hepburn get together to give you celebrity advice on how to throw your very own Hollywood Party! 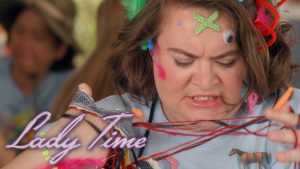 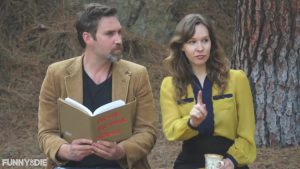 A sunny day. A pretty girl. A cup of tea. 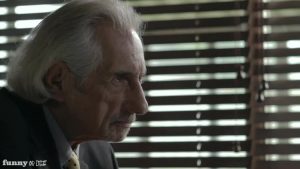