A woman in Indiana is making the rounds on the ol ‘ internet machine this week for offering to sell her gorgeous river home for $199 to the person who writes the best essay explaining why they want it.

Before you grab and dab ya damn quills and Hemmingway your way into this river front house, read the fine print. The submission fee is $199, so depending on how many people submit (likely a lot) the current owner could stand to make just as much if not more than what she ”d get selling it ‘traditionally.”
Also, this method isn ‘t like, new. Even the current owner admits to this, saying she was turned onto the idea by similar real estate sales methods in Maine and Alabama. A man in Houston, TXalso put his home up for sale, asking only for a hot $150 and some top notch prose. But while this isn ‘t the most original idea, it is becoming more and more popular and prevalent all thanks to the internet.

To be fair, of course it popular now because it ‘d be pretty near impossible to pull this sales stunt pre-internet. The best you could probably do is get your sister ‘s sixth-grade students to all write an essay and maybe some lonely ladies at the local library. There ‘s no way you ‘d be able to surpass or even reach the value of the house. Plus, sixth graders can ‘t write for shit and can ‘t own a house. That ‘s just the truth.

But, all curmudgeonliness aside, hopefully this Indiana homeowner finds the essay of her wildest dreams and gets the straight cold cash from the thousands of other subpar writers who want the rad river home. High school seniors and college students, get in on this. You ‘re probably 100% better and more sharp on your essay writing than anyone of age looking to buy a house. Think of all the dope parties you can throw in this place and brag that your brains 100% helped you get it.

If the movie ‘Groundhog Day’ took place on February 2nd, 2016 in a reality where Trump won the Iowa caucus it might have gone something like this.

Have either of these guys ever held office? Nope, but neither has the current president… so I guess they ‘re qualified for the job!

#3. He’ll fake his death and let his “twin brother” take over. 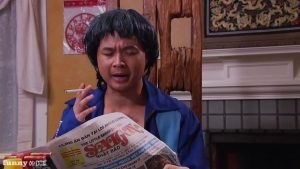 What happens when the average guy brings home the hot white girl to meet the parents?