If you aren ‘t already a #dad, then surely you ‘ve wondered your whole entire life just what it would be like to be one. Dads are the coolest, second only to #moms and unlikely animal friendships.

ANYWAYS, one dad, who happens to be a very funny dad named James Breakwell, has been honored with the task of raising four daughters and is documenting it on his hilarious twitter account.

5-year-old: I drew a llamaman.

I have so much to learn about everything.

Me: Why are you crying?

Now we ‘re both crying.

There were some who said I couldn't be cool AND be a dad.

Toddler: *spills an entire bowl of popcorn and then eats it off the floor*

5-year-old: What else did you lie about?

I took the day off work to hang out with my 5-year-old.

Me: Why are you being so loud?

Me: So why are you yelling?

I was so proud of my kids for not touching the Tupperware container full of cupcakes.

Then I opened it. pic.twitter.com/zQS4VaH637

3-year-old daughter: A boy at daycare said he likes me.

3: He colors outside the lines. He needs to grow up.

Me: You can't like Kylo Ren. He killed his dad.

5-year-old: Maybe he deserved it.

Yes, I pulled off the pudding heist.

I would have gotten away with it, too, if I didn’t get stuck in the damn chair pic.twitter.com/OhGCMA3dSM

Me: WHO BROKE THE END TABLE?!

5-year-old: I'm pretty sure it was always like that. pic.twitter.com/ZTHr4YXFMI

Me: Would you want to live in a gingerbread house?

Wal-Mart announced last week that they are ditching their one CD that included tracks by Celine Dion and Justin Bieber and will instead be hiring a DJ to spin tunes for their store. My cousin found out about this and asked that I send along his application.

As paid maternity leave is not legally guaranteed by the United States government, all employees must be prepared for the eventuality of office births. This training video will help instruct you on how to deliver a baby in the workplace. 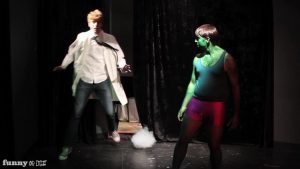 A special taped performance of the new Incredible Hulk ‘ musical.

The NSA addresses allegations that the U.S. has been spying on Germany.

Ben Schwartz stopped by the Entourageathon on both days, super early in morning, to help keep Gil Ozeri awake and “sane.”