Lots of great stuff still here! Definitely grab those fluorescent bulb, they ‘ll make for a tasty bulb stew. These hinges will be a fine supper.

I love how much talking Sheriff Scrabble does outlining exactly how he will shoot this guy, and the guy STILL goes for his gun and gets shot. Anytime someone is explaining all the ways and reasons why and how they will unload a firearm on you, it ‘s probably safe to assume it ‘s not a bit.

2) She Doesn ‘t Want To Talk About The Guns

Uh ‘ Al. You ‘re driving around in a murder van full of guns, of course people are going to want to ask questions about the guns. Maybe have a “DO NOT ASK ME ABOUT MY GUNS. SERIOUSLY ‘ sign to avoid any future confusion on the issue.

3) These Guys Are Not Very Good At This

John interrogates him and gets his map, but ascertains no real information. Then Morgan tells him to get on his way and warn the others. Then John hands over his guns to the only other dude in this apocalypse that does not want to kill people. How are these two still alive?

Draaaaaammmaaaaaa. Where people want to bone, there will always be drama. Even in the zombie apocalypse.

Strand is right. A slice of processed ham does not a meal make. Someone should tell the writers of this and the other zombie show because we ‘ve all been chewing a lot of sliced processed ham slices and pretending it ‘s dinner for a minute now.

5) Madison Explains Why She Saved Strand

It ‘s simple. She likes drinking warm liquor with him on roofs. Once you find the person who ‘s down to do that, you want to hold on tight and not let go. Which is also what you should be doing to that hot bottle of hooch on a roof.

Ahhh, yes. Let us seek refuge and safety in this disgusting motel where people were definitely getting murdered regularly long before zombies showed up on the scene.

Madison says Los Angeles feels like three lifetimes ago! Which is another way to say it feels like three seasons ago on a show where every season the show changes entirely to basically a brand new show.

Strand calls New Fake Doctor Lady a coward and demands her car keys. Nice try, lady! These are clearly decoy teas! One of them says Fisher Price and another is just a piece of a Slim Jim wrapped in a paper clip.

New Fake Doctor Lady is going through a mid-season crisis. She hot-wired a tacky convertible and got a gun. Next up she ‘s going to start dating a man half her age and drinking prosecco at all hours of the day, I ‘ve seen it a million times.

Only in video games are there zombies directly next door and you hit a dimly lit cage to read a journal with plant drawings by flashlight.

DAMN, WOMAN. BE VERY QUIET AND DO NOT FART RIGHT NOW.

She is so sad her dead kid sucks at art that she falls over and attracts a bunch of damn zombies with her falling over ass.

Then climbs her way to freedom in this tree house of death.

Strand is going to build a zip line out of old t-shirts he strung together while Madison makes face lollipops in the corner. It ‘s the perfect plan! We can ‘t miss.

New Fake Doctor Lady goes full cliffhanger over these zombies. LMAO. This season has had A LOT of highly visual very weird physical challenges and adventures. Next week they ‘re going to have to scale a rollercoaster to find plant food. Then kayak through an abandoned aquarium to forage for fish bones that will come in handy for arts and crafts hour. They ‘re building bird houses!

Madison specifically says she DOES NOT have to tell her story. Then New Fake Doctor Lady tells her whole damn story. Read the room, Miss!

So apparently there was someone named Ellen and she taught “JIC ‘ classes which stood for “Jews In Charge ‘ and they were all about Ellen ‘s thoughts on who controls the media. Very controversial classes! I did not understand the point of this offensive story.

Then it turns out this is all her fault because her kid got sick and turned and got everyone killed before she could come back with the cough medicine that tastes like oranges. Gosh I used to love that stuff. All of this proves my theory that kids are stupid and bad and you shouldn ‘t have them because they will ruin your life as well as the lives of everyone in your survival camp.

Do you REALLY think you can reason with a man dressed like that? Because you are certainly wrong about that fact.Welp! Their truck of supplies showed up and this dude who gets dressed in the dark very ominously makes his exit with a lot of spooky foreboding shit as he ‘s packing up. I ‘m sure that ‘s the end of him and zero worries or issues from here on out.

Madison tells Alicia to grab some medical supplies and drawings of an orange tree then throw them in the Land Rover on top of her season pass to the zombie water park. But keep it quiet, because everyone likes the water park but they can only fit six people in that car max and that includes someone sitting in the trunk which IS NOT SAFE but totally worth it if it means one more person can hit the wave pool with the crew.

I have FINALLY come around to all these flash forwards! I like them now! Just kidding. I do not like them.

Alicia is NOT happy Morgan warned their sworn enemies. She kicked his stick?!? NOT COOL, ALICIA.

Aaaand the gang is now all here! Thanks to Morgan ‘s warning intended to prevent murder, everyone pointing guns at everyone. Perfect.

Morgan says it doesn ‘t have to go this way, but maybe it does? Maybe sometimes it has to go this way, and this might be one of those times. Also, once again, Morgan is the reason things are currently looking the way they are.

OH. SNAP. LAURA IS HERE! I FORGOT HER NAME WAS LAURA, I HAVE BEEN CALLING HER NEW FAKE DOCTOR LADY THIS WHOLE EPISODE AND STRAIGHT UP FORGOT HER NAME UNTIL HE SAID IT BECAUSE WHO CARES.

BY SHOOTING A GUY WHO IS NOT TO BLAME AND WE ALL REALLY LIKED. GOD DAMMIT, ALICIA. YOU ARE TURNING INTO NEW NICK VERY FAST AND THAT FRUSTRATES ME FOR SEVERAL REASONS. Ugh. TUNE IN NEXT WEEK! What will New Nick do next? Probably shoot someone else then go look for heroin. Will we ever find out what happened to Madison? Yes. I guess. Maybe not. I don ‘t know. Nobody knows. How is Al keeping her camcorder battery charged? She certainly films a lot! And always uses the viewfinder! I have no damn clue and neither do the people writing this show. NONE OF THIS AND MORE! Next time on S04E07 ofFear The Walking Dead! 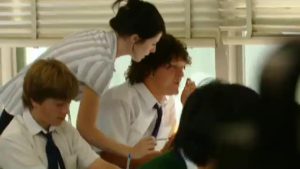 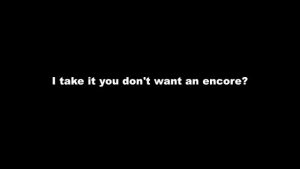 Woman singing gets slapped with flour by man. Thanks to: youtube.com/MSBAM100 For more FAIL visit http://failblog.org 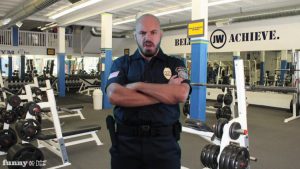 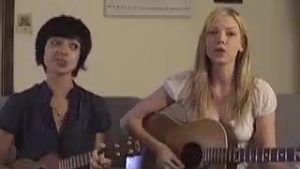 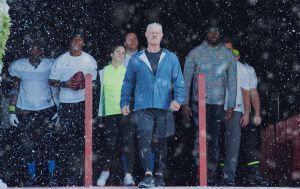