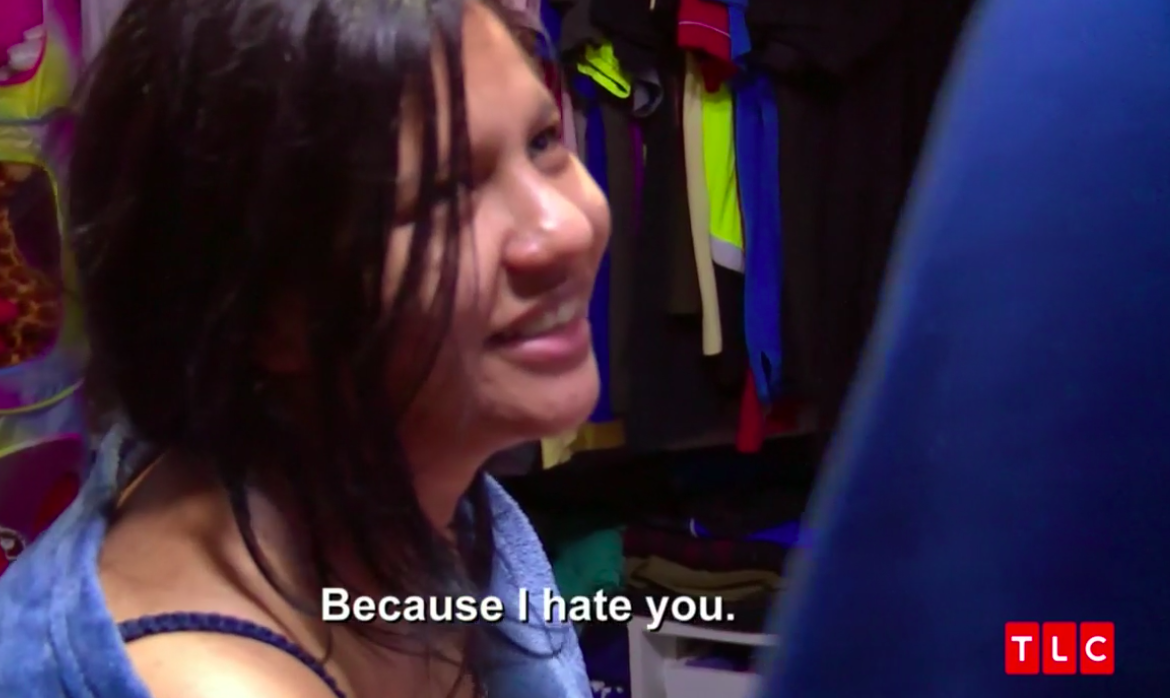 Listen, there are several important questions that we must ask ourselves in life. For example:

“Is this anti-abortion pin I bought on Etsy too abrasive for daily use? ‘
“Does my disdain for facial fillers make me anti-feminist? ‘
“Can I forgive myself for occasionally indulging in single-use plastics? ‘

Important stuff. The cast of 90 Day Fianc ‘: The Other Way faces some weightier, yet equally as emphatic, questions in episode four. Questions like:

“Will I have a functioning toilet? ‘
“Will my son be raised by a South African criminal? ‘
“Will this lock of my mother ‘s hair protect me from the Amazonian gunmen outside my apartment? ‘

All important things that, APPARENTLY, no one in this intrepid cast has considered before deciding to make major life changes. Here are more.

Oh Jenny. In the beginning of this episode, we see her bob and weave around and Indian airport like a lost little lamb. Fresh off of a 20-hour flight from Palm Springs, she ‘s struck with the harsh reality that her phone doesn ‘t work in India. Girl, YOU DIDN ‘T THINK OF THAT BEFOREHAND? Like, at all???

Poor Jenny Jenny. No one has your number.

When she finally sees Sumit (still unclear whether it ‘s pronounced SumIT or SuMEET, as she goes back and forth) at the airport, he sweeps her into his arms and gives her a big schmoopy kiss. This is her Prince Charming. Albeit one who lives abroad, works in a call center, and catfished her using the name Michael Jones. Tomato, tomahhto. SumIT, SuMEET.

It can ‘t be cultural appropriation if you ‘re residing within the culture you ‘re appropriating, right? Said the white lady typing on her MacBook while trying to rationalize the tribal fabrics in her own home.

As we enter their apartment, Jenny exclaims, “The struggle is real, ‘ while carrying luggage up the steps. A phrase which is henceforth cancelled, along with any and all word art. You know what I mean. Witty phrases scrolled upon driftwood at your local Target.

Words aside, Sumit tried hard to make a nice home for them with new furniture that ‘s still wrapped in plastic. I ‘m touched that Jenny boldly allowed him to choose the furnishings. Ya girl would never!

We do get a hint of foreshadowing when Sumit says, “This is too expensive for me to cover all the costs…. ‘ Hmm. What did you think was going to happen when you brought your retired girlfriend to a country she ‘s completely unfamiliar with? Well, I know what you thought, but Jenny ain ‘t got money! Being blonde doesn ‘t make her rich.

Paul Can ‘t Get A Job

Paul (hopefully you ‘ll remember that he ‘s This Idiot in my lexicon) is on his way to Brazil after being sidetracked by a baggage issue. There was an embargo, it was a whole thing. In the previous episode, Paul ‘s own mother said that his computer doesn ‘t have all the wires. Couldn ‘t be more on the nose, Mother Paul.

We see Paul holding his passport and his nails are long and filthy. I believe that TLC ‘s editors showed us this purposefully as a comment on this man ‘s character. It ‘s as though they ‘re reaching through the screen, saying, “PLEASE NOTICE THIS CRAZY THING THAT WE CAN ‘T IGNORE. ‘ Message received, friends.

I ‘m not done. I truly can ‘t think of a less desirable feature than long, dirty fingernails. And also! Paul ‘s primary source of income is shovelling cow patties in Kentucky, so IMAGINE what kind of bovine fecal matter he ‘s transporting to Brazil. Imagine!

Then we have a long scene with Karine and her brother…. Bonnie. Bonnie is justifiably skeptical of Paul ‘s ability to provide for his new family, since he ‘ll be unable to work in Brazil. He says Karine spends a lot of time in her room crying and it ‘s like… yes. If you were impregnated by a man who was a psychotic American arsonist, which is what you kind of love about him, I can understand the torment.

Also, Paul has NEVER made an effort to learn Portuguese, while Karine is taking English classes. Is there a word for heteronormative but American? Like Ameronormative? That ‘s what he is. Aside from bonkers.

Paul arrives at Karine ‘s apartment, which, apparently, someone was just murdered in front of. I can only pray that his mom ‘s hair keeps him safe from predators so that he doesn ‘t have to flee into the woods once again.

Karine is completely unenthused to see Paul. You know what Paul ‘s excited about? His bullet-proof, camouflage Uppa Baby. This Idiot couldn ‘t be more of an American redneck.

Daniel Will Be Parented By A South African Criminal

Yes. Okay. Tiffany and Daniel are moving to South Africa to live with a criminal. A CRIMINAL. In the purest sense of the word. Crime does not pay, unless you ‘re a thief. Unfortunately, Tiffany ‘s fiance, Ronald is a gambling addict so he chose the wrong thing.

If you ‘ll recall, in the last episode, Tiffany met with an immigration lawyer in her home state of Maryland and Ronald ‘s sordid criminal record was revealed to the world.

Tiffany told the lawyer, who, by the way, was serving us red, white, and blue patriotic tie realness, that she hadn ‘t asked a lot of questions about Ronald ‘s past. Law Daddy was like, “BITCH, you need to! ‘That ‘s the thing about lawyers. They lay down the law.

Anyway, Tiffany ‘s sweet little boy Daniel is a baby angel and I love him. He ‘s a perfect, innocent, and expressive child with blonde highlights. And his best friend Malik has blue dreadlocks. They ‘re like a child superhero duo called The Hairnators: Hairing Here and There and Everywhere. They fight crime with their cool hair. (It ‘ll be a hit – send it to Looney Tunes. I ‘ll play the voice of Daniel.)

Tiffany and Daniel visit the playground and Daniel is tasked with telling his best friend he ‘s moving and, maybe I ‘m ovulating, but nothing has broken my heart like this in days.

The Hairinators hang out on the merry-go-round and Daniel says, “All I want is to have you in my life forever because you ‘re my best friend. ‘ YES I AM FULLY WHHHEEPING. Weeping at the purity of their friendship? Of course. But also because his MOTHER IS TAKING HIM TO SOUTH AFRICA TO BE RAISED BY A CRIMINAL AND HE WILL LOSE THIS BEAUTIFUL, DELICATE INNOCENCE.

Then Daniel and Malik share a tender embrace and he starts to cry. TIFFANY, THIS IS A BAD IDEA!!!!! Don ‘t separate The Hairnators.

The end of the episode sees Tiffany and Daniel board a plane to South Africa to meet Ronald, who is in rehab. Listen, nothing against a rehab…Lord knows, I love ‘a rehab. but wow, honey YOU SHOULD HAVE THOUGHT THIS THROUGH.

In the previous episode, we were introduced to Laura, who ‘s Canadian. There ‘s something about Canadians (the homeland of my future), wherein we must point out a notable Canadian every time we encounter one. Peter Jennings, Alex Trebek, and now Laura. Move over, The Raptors, these folks are truly the pride of the North. (Rest in peace, Peter Jennings. Feel better, Alex Trebek.)

Anybutts, Laura is 51, lives in Florida, and married a man in Qatar after knowing him for five days. We may need to take her off the list of notable Canadians.

Laura ‘s Qatarian (is that the proper adjective? Who knows!) husband is 29 and works as a personal trainer. Aladin (pronounced Al-A-Dean, not Aladdin, of Disney fame) has a big smile, airpods, and a job so I ‘m fucking sold.

Being from Canada, I know that Laura will take exactly zero shit from this guy. My people are strong, they fight moose, they get bitten by black flies in the hot Ontario summer. Maybe that ‘s just my Aunt Barb, but I do think she ‘s emblematic of many Canadian women.

Is she Canadian? You may be wondering about me. Well, my mother is Canadian and a nice girl at the UPS store, whom I have since turned on, sent my application to the North about six weeks ago, so it ‘s possible! I ‘m becoming Canadian as we speak.

Yes, Laura. She catfished her ex-husband by making him shave his head, which is honestly the way to do it. If they try to pull anything, make a fool out of ’em, I always say. So Laura is going to Qatar, but first she must break the news to her brother, Ludwing.

Laura refers to Ludwing as her “adopted brother, ‘ which must mean chosen family, and is a concept I strongly believe in.

The most beguiling part of this entire episode is when Ludwing offers to make Laura his signature Ludwing Grilled Cheese, which is… please brace yourself…. A GRILLED CHEESE WITH SYRUP ON IT. SYRUP! Like. AUNT JEMIMA! On a grilled cheese… Listen, I am completely incapable of determining this man ‘s nationality (and since he ‘s her “adopted brother ‘ and favors maple syrup, you may be quick to assume that he ‘s Canadian), but I am POSITIVE this abomination of a classic American meal is native to NO LAND. I yelped aloud.

Awful grilled cheese aside, I do like Ludwing. He ‘s a little guy with a big sense of humor. The line that cements him in my heart is, “If I put myself in her shoes, I would be taller because she wears high heels. ‘ Very good.

The difficult, and even cringeworthy element of Laura ‘s story arc, is that Aladin wants kids. Laura says that she doesn ‘t know if she can have them… Here ‘s the thing. I ‘m about 25 years her junior and my average likelihood of getting pregnant every day is about 6% so, um, well, probably not. But hey! There ‘s always Janet Jackson, so MAYBE!

And that ‘s our episode. Next week, we ‘re meeting another new couple who also seems completely miserable. I can ‘t wait! 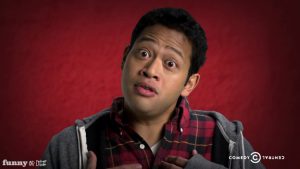 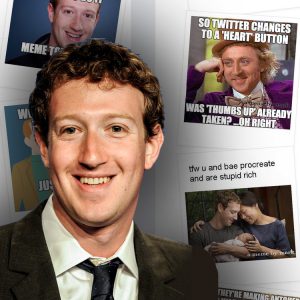 Mark Zuckerberg’s Year In Review was tasteful and professional, but the one he uploaded from his personal account? Not so much. 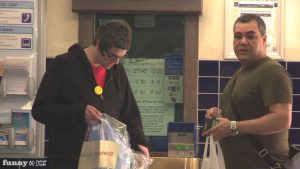 This week, the Mates test just how far their bartering skills can take them in their quest to go snowboarding! Presented by Pepsi Max and Funny or Die! Follow the Mates @MatesVs and http://www.facebook.com/MatesVs 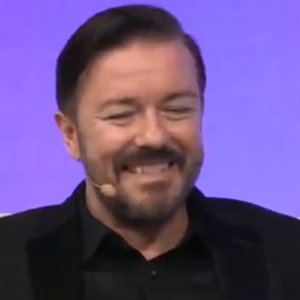 So many links on the internet. Here are 6 of them. 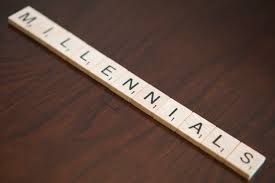 Millennials view Republicans as old fashioned and out of touch so the GOP is reaching out to the youngsters to find out what they can do to be cool again.

Google Launches It’s Own Mobile Network, You Lost Me There