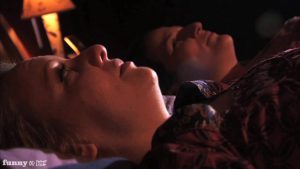 Scene from the movie Fully Loaded in which Paula shows lisa how her need for security with a man is ” like lesbians”. Fully Loaded is a dark comedy that follows Lisa and Paula, two unique single women, both mothers, out for an LA “night out”. When Paula’s sexy hook up with a total stranger turns into a sketchy confrontation, the women hit the road in Paula’s minivan, a little drunk, but very high on love/lust and what could have been. This “van-centric” film offers a rare opportunity to hear how women really feel about men, relationships and themselves in this post-feminist era. The conversation is current, the sound track is killer and the women are real. Produced By: Adam McKay, Jeremy Piven, and Tom Burruss Directed By: Shira Piven Starring: Paula Killen, Lisa Ann Orkin, and Dweezil Zappa With: Jake La Botz, Dave Koechner, David Yow, Ana Gasteyer, Wendi McLendon-Covey, and Danny Pudi