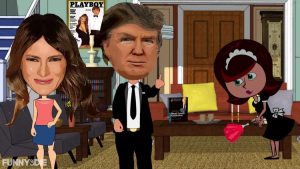 Trump has some unexpected company and declares his love of minorities. In this episode of the animated sitcom, That Darn Trump! Donald Trump speaks in his own, amazingly terrific words about immigrants, Muslims, Mexicans and African Americans. Hillary and Bill Clinton join in on the fun as they discuss Donald ‘s hilarious views on women and the world. Make America Great again with Donald J. Trump…one of the greatest politicians in his own mind.