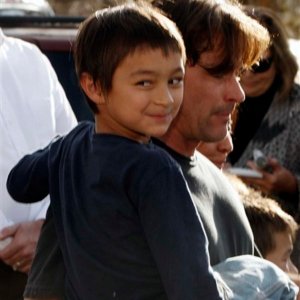 Six-year-old Falcon Heene is shown with his father, Richard, outside the family’s home in Fort Collins, Colo., after Falcon Heene was found hiding in a box in a space above the garage on Thursday, Oct. 15, 2009. Falcon Heene at first had been reported to be aboard a flying-saucer-shaped balloon fashioned by his father and then carried by high winds on to the plains of eastern Colorado. (AP Photo/David Zalubowski)