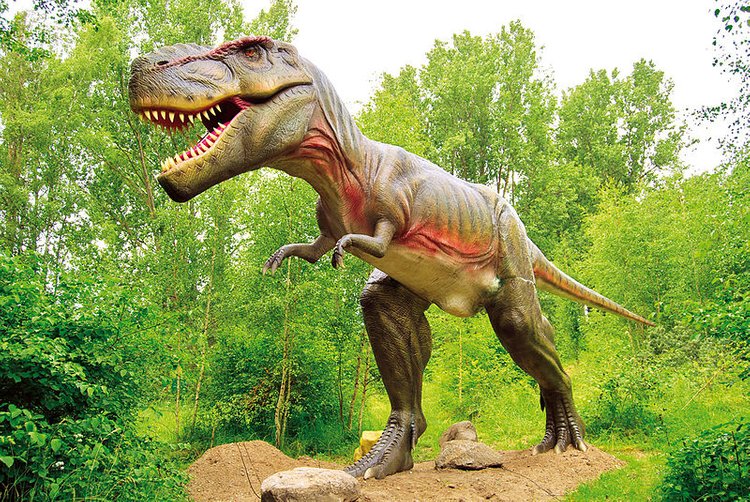 A study published in the journal Science Advances concludes that the Earth has already begun its sixth mass extinction and the first since the dinosaurs ‘ 65 million years ago. The researchers found that since humans started having a large impact on the environment in the 16th century, over 300 vertebrate species have gone extinct. Additionally, vertebrates ‘ including mammals, birds, reptiles, amphibians, and fish ‘ are disappearing at a rate 114 times faster than normal. Gerardo Ceballos, lead author of the study, said that as the world ‘s biodiversity dips, ‘life would take many millions of years to recover and our species itself would likely disappear early on.”

What are humans to do when faced with their end days? We spoke with the last sufferer of mass extinction and an expert on the subject, T. Rex, to answer all of humans ‘ pressing questions and get tips on how to handle humans ‘ impending mass demise.

Q: Why is the sixth extinction happening now?
A: Because you humans were a bunch of idiots who caused your own demise. At least us dinosaurs had a huge asteroid to blame!

Q: When the fifth extinction happened, what were the last few days on Earth like for the dinosaurs?
A: Things got real dicey at the end. Triceratops fucked everything in site. Brontosaurus gorged on a ridiculous amount of grass and was like, ‘Fuck vegetarianism” as he tried meat for the first time. Velociraptor kept going over her emergency kit, as if a few Band-Aids and iodine pills were going to stop the destruction ‘ trust me, they won ‘t.

Q: Should I worry about my fellow humans or other animals who will also be dying in this mass extinction?
A: Are you nuts? Watch out for yourself, SON! Do you think those crocodiles gave a shit about my well-being?! No. They kept their survival secret to themselves, like the assholes they still are.

Q: So who will run things when we humans are gone?
A: The roaches. The goddamn roaches will outlive us all.

Q: As a human, I know I ‘m probably directly responsible for the extinction of the human race and couldn ‘t be bothered to do a single thing to change the course of the world because I was busy Instagramming my lunch, but is there anything I can do now? Like maybe bring my own reusable bag to the grocery store?
A: ‘ please die as fast as possible?

Q: Yeah, I don ‘t think this will really happen to us.
A: That ‘s not a question.

Q: Humans are smarter and better than dinosaurs.
A: ‘

Q: Do you think the sixth extinction is the Apocalypse?
A: Man, you humans never cease to amaze me with your anthropocentrism. It ‘s all about you, huh? It isn ‘t the end of the world ‘ just the end of you humans. Whatever comes after you will hopefully be smarter and less shitty than you guys.

Q: But if it were the Apocalypse, is it being caused by Barack Obama, antichrist?
A: I ‘m glad you brought this up because it brings me to an important point: Label everything with a date before you die. You wouldn ‘t believe the crazy theories people will come up with for the dates you lived and died. I ‘m looking at you, creationists!

Q: I ‘m really scared to die in a mass extinction. Should I be scared?
A: At first, it will suck a lot. But it will all pay off in about 65 million years. If you ‘re anything like us dinosaurs, you ‘ll become famous and end up as the centerpiece in a museum. Kids will own action figures that look like you and lovingly refer to you by a nickname like ‘humos.” And have you seen my new flick, Jurassic World? I ‘m a rock star!

Q: Follow-up question: Who will play me in the inevitable movie about the sixth extinction?
A: Don ‘t even get me started on this one. With all humans dead, you ‘ll likely be played by some shitty robot or CGI animation. Maybe the technology will be better by the time your movie is made.

Q: Sorry, yet another follow-up question: While I want to be posthumously famous in 65 million years, I do not, however, want to be depicted like Barney the Dinosaur because that would be embarrassing. How do I avoid that?
A: Sorry, bud. You can ‘t. Been there, done that, got the t-shirt. 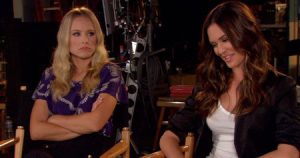 The cast of “You Again” (Kristen Bell, Betty White, Sigourney Weaver, Odette Yustman) sit down for an interview and it turns ugly, quickly.

This 2010 episode of COPS shows the early warning signs of a militarized police force.

This week’s tweets are due literally any day now. 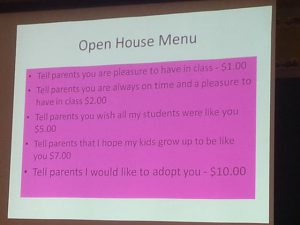 Teacher Offers To Praise Students In Exchange For Money 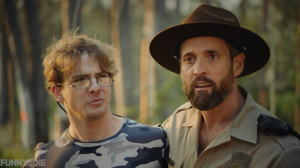